Position all your implements with precision and repeatability!

Economical, simple, and unique, the universal guidance interface DynaTrac is compatible with all models of tractors equipped with an RTK (or camera) guidance system and fits with all implements.
Capitalizing on several years of R & D and sales in the United States and Europe, DynaTrac range of interface makes it possible to follow the tractor path with any implement. It allows using standard implements and reaping the benefits of precision farming at every stage of the crop.

GPS tractor guidance benefits are recognized by farmers around the world. They ensure repeatable tractor positioning but implements never trail perfectly behind the tractor.

Reasons for implements inability to follow the tractor accurately : 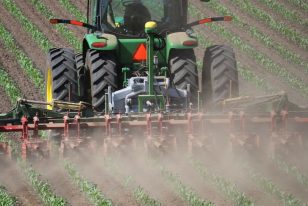 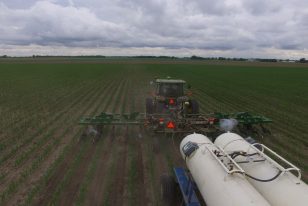 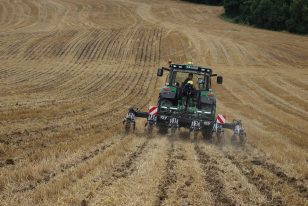 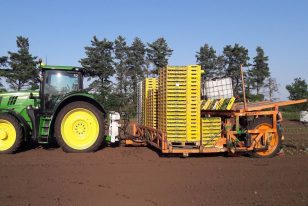 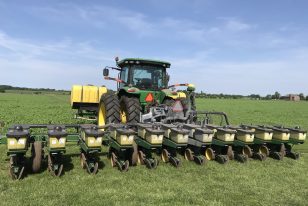 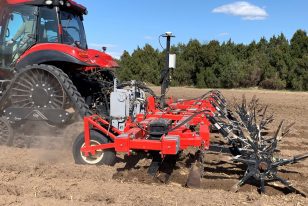 ✔ Efficiency: a DynaTrac® interface coupled with a guidance system (GPS or camera) allows farms to instantly get ready for precision farming with their current range of implements and the ones to come.

✔ Simplicity: the user only needs to understand and set up one kind of interface instead of a specific one for each implement.

• Strip-till implement guided to only till area to be seeded, allowing to reduce fuel consumption and limit soil disturbance. Place seeds at a later stage accurately by guiding planter with DynaTrac® as well.

• Planting with regular spacing between rows on the whole field allowing:

Mechanical termination of weeds (cultivator). Possibility to work even at early / late stage of plant growth, in windy or in poor light conditions because of GPS signal.

Harvest optimized and fast with no guess rows and harvester guided by seeding line.

• Efficient bedding and planting of vegetables- thanks to accuracy preventing overlaps and poor positioning which generate yield losses.

• Fertilizer applied as close as possible to the roots, whatever the growth stage of the plant. Savings for the farmer and decrease of fertilizer application rate positive for the environment.

allows to position irrigation tapes precisely and then plant close to them to boost yields while limiting water consumption.

Efﬁcient : guarantees working precision of the rear implement at each step of the crop

Cost effective : guidance function is purchased only once and can be used with all farm’s implements

Optimized mechanical weeding : eliminates the constraints of camera guidance as it doesn’t require the crop to be visible : 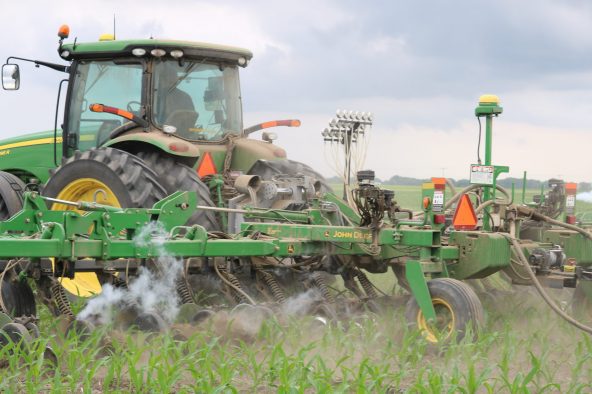 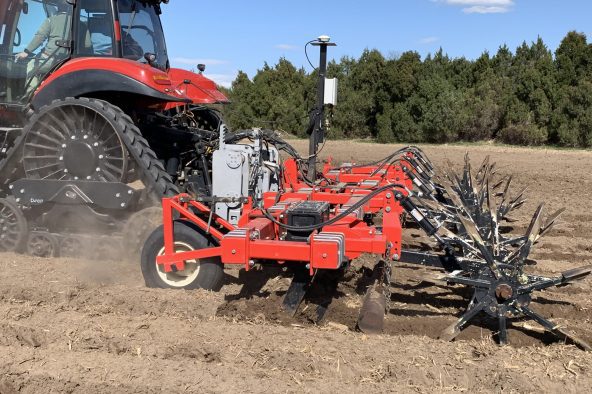 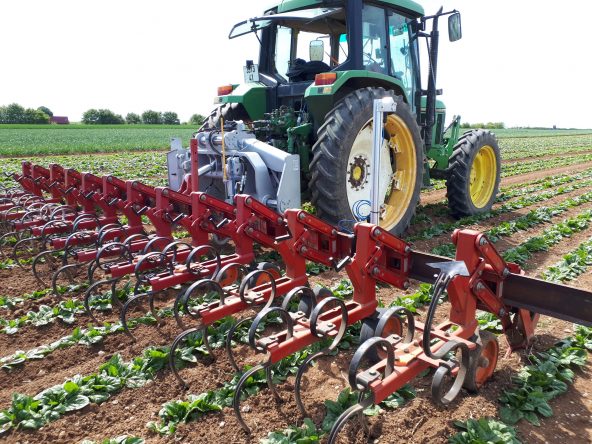 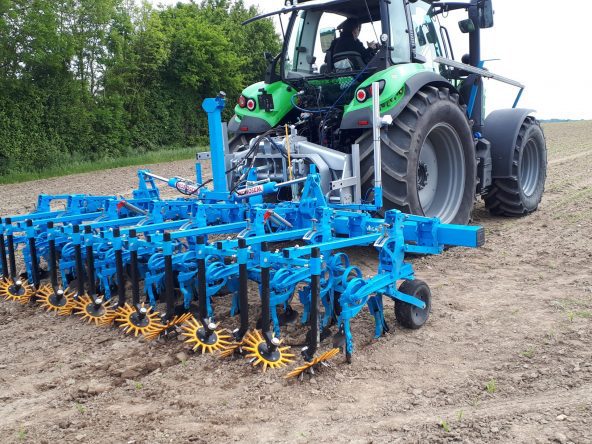 Great ﬁt to guide only a mechanical weeder and offered as option, the Vision pack (DynaTrac & Camera) is:

Specifically designed for light tractors, the DynaTrac® COMPACT features an exclusive design allowing it to accommodate all implements, including those requiring PTO compatibility.

DynaTrac® PREMIUM has a lateral shift of 25 centimeters on each side but doesn’t fit implements requiring PTO. It is very suitable to drive a row crop cultivator or any implement without PTO connection.
• Travel range : 50 cm / 20’’
• PTO drive line compatibility : NO
• Maximum implement weight (as per ISO standard reference): 4 000 kg / 8 800 lbs

Les DynaTrac® COMPACT, PREMIUM, PREMIUM+ & ULTIMA have an exclusive design that replicates all the features of a tractor rear hitch. This allows positioning of the implement easily, precisely and with repeatability by following the instructions of the guidance system.

« I can run higher ground speeds and cover more acres in a day with my sprayer because the row is true and I can trust my guidance to keep the sprayer off the crop. »

LAFORGE Group
2020-05-05T14:48:37+02:00
« I can run higher ground speeds and cover more acres in a day with my sprayer because the row is true and I can trust my guidance to keep the sprayer off the crop. »   ~ Jack Smith, Iowa (USA).
https://www.laforgegroup.com/testimonials/top-productivity/

« Eliminates guess rows! I don’t have any issues running a 12 row corn head and a 16 row planter because the rows are uniformly spaced pass to pass. »

« It makes the process of growing seed corn easier with multiple passes across a ﬁeld and equipment matching up to rows (male rows are planted later than female rows, multiple sprayer passes, mechanical detassler pass, mowing down male rows) »

« I reduced more than 70% of manual labor weeding cost in my organic farm area by being able to cultivate closer to the plant (corn) thanks to the precision enabled by DynaTrac. »

LAFORGE Group
2021-01-05T17:08:57+01:00
« I reduced more than 70% of manual labor weeding cost in my organic farm area by being able to cultivate closer to the plant (corn) thanks to the precision enabled by DynaTrac. »   ~ Richard White, Wisconsin (USA).
https://www.laforgegroup.com/testimonials/worth-it/

« My potato ridges are all regularly spread, we can't find the different implement passes! »

« With the GPS guidance of my cultivator, I can cultivate before the emergence of the crop, when there is wind or dust without any problems! »

LAFORGE Group
2021-01-05T17:06:17+01:00
« With the GPS guidance of my cultivator, I can cultivate before the emergence of the crop, when there is wind or dust without any problems! »   ~ Pierre Ferriet, France.
https://www.laforgegroup.com/testimonials/mechanical-weeding-without-restriction/

« Perfect at every stage of sugar beet growing! With the DynaTrac, all my implements are guided: my planter for straight and perfectly spaced rows, my cultivator without constraints but with precision and finally my sprayer for localized spraying on the row »

LAFORGE Group
2021-01-05T17:02:08+01:00
« Perfect at every stage of sugar beet growing! With the DynaTrac, all my implements are guided: my planter for straight and perfectly spaced rows, my cultivator without constraints but with precision and finally my sprayer for localized spraying on the row »   ~ Olivier Reton, France.
https://www.laforgegroup.com/testimonials/versatility-guaranteed/

Tractor and implement guidance without interferences

LAFORGE Group
2021-01-05T16:59:25+01:00
« I’m impressed with its ability to move the ripper bedder that has 4 hilling up units on it from side to side without shifting the tractor »   ~ Matthew Gray, Kununurra (Australia).
https://www.laforgegroup.com/testimonials/tractor-and-implement-guidance-without-interferences/
0
0
LAFORGE Group

Why Implement guidance in vegetables?

Precision. Accuracy. Consistency. These are important aspects in any farming…
Read more 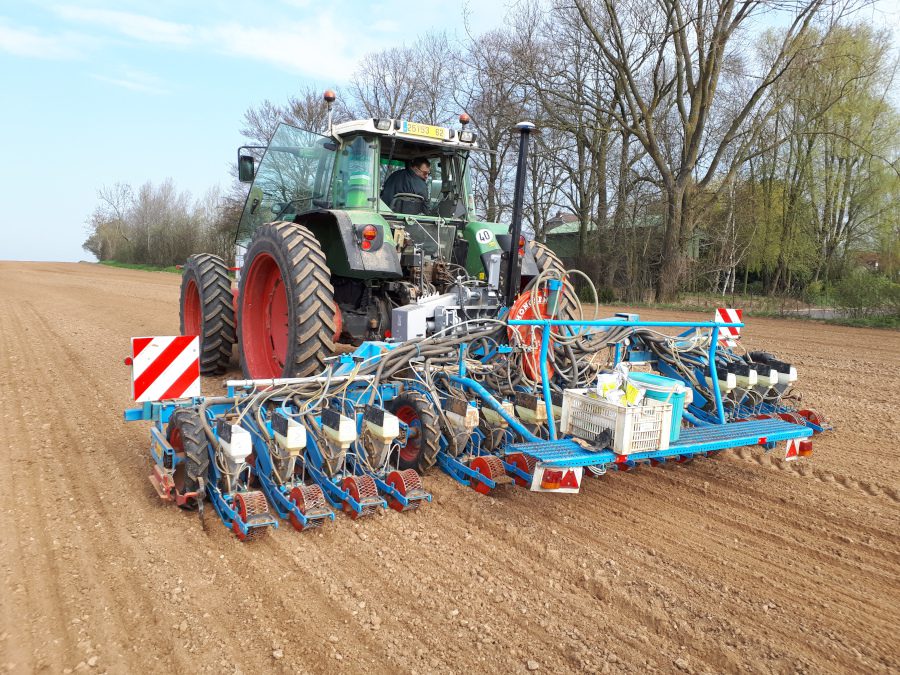 Why Implement guidance in corn? 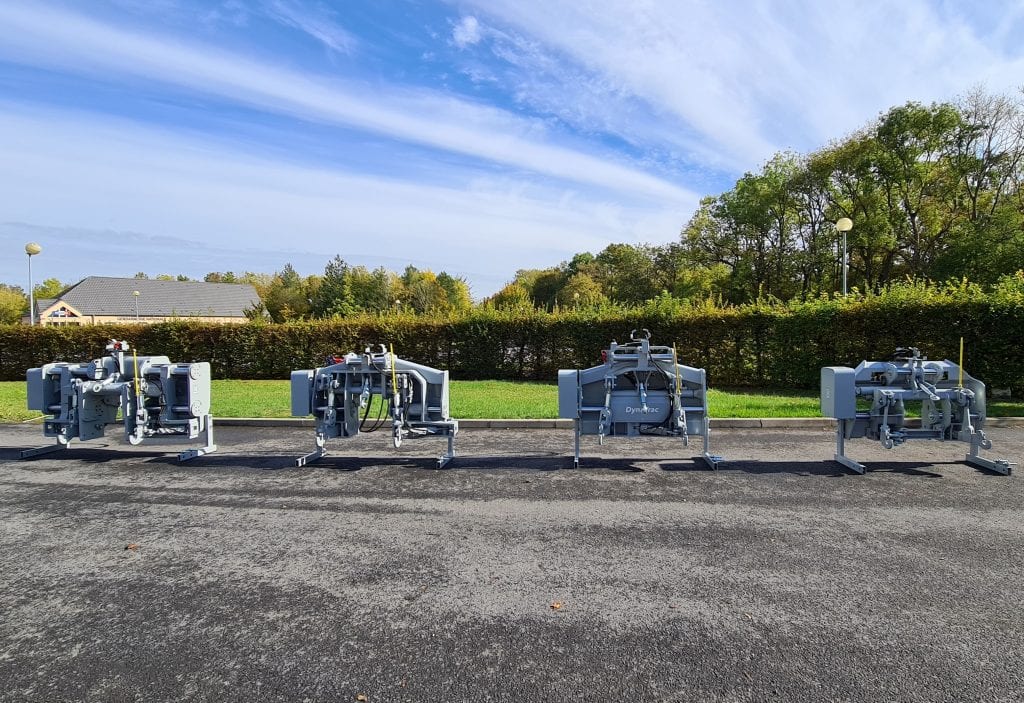 Manufacturer of agricultural equipment since 1972. Tractor-implement expert, recognized for the quality of its range of front hitches, PTOs and guidance interface.

By continuing to browse our site, you agree to the installation and use of cookies on your computer.
Cookies are files that allow us to personalize content and ads, provide social media features and analyze traffic.
They also allow us to improve the quality of our services.
Accept allRejectCookie settingsLearn more about our privacy policyDo not sell my personal information
Cookie management

This website uses cookies to improve your experience while you navigate through the website. Out of these cookies, the cookies that are categorized as necessary are stored on your browser as they are essential for the working of basic functionalities of the website. We also use third-party cookies that help us analyze and understand how you use this website. These cookies will be stored in your browser only with your consent. You also have the option to opt-out of these cookies. But opting out of some of these cookies may have an effect on your browsing experience.
Analytics
Analytical cookies are used to understand how visitors interact with the website. These cookies help provide information on metrics the number of visitors, bounce rate, traffic source, etc.
Functional
Functional cookies help to perform certain functionalities like sharing the content of the website on social media platforms, collect feedbacks, and other third-party features.
Necessary
Necessary cookies are absolutely essential for the website to function properly. This category only includes cookies that ensures basic functionalities and security features of the website. These cookies do not store any personal information.
Others
Other uncategorized cookies are those that are being analyzed and have not been classified into a category as yet.
SAVE & ACCEPT